We were able to sit down with two of our axe throwing champions from Omaha, Nebraska this week to talk to them about an upcoming tournament they are competing in.

Ryan and Nick have been competing in our axe throwing league for a few years now. They are both nationally ranked & currently two of the best axe throwers in the United States. We are excited to sponsor them at their upcoming tournament: Show-Me State Throw Off!

Below are questions we asked Ryan and Nick along with their answers. Have fun getting to know a couple of awesome guys!

Experience Axe Throwing for Yourself 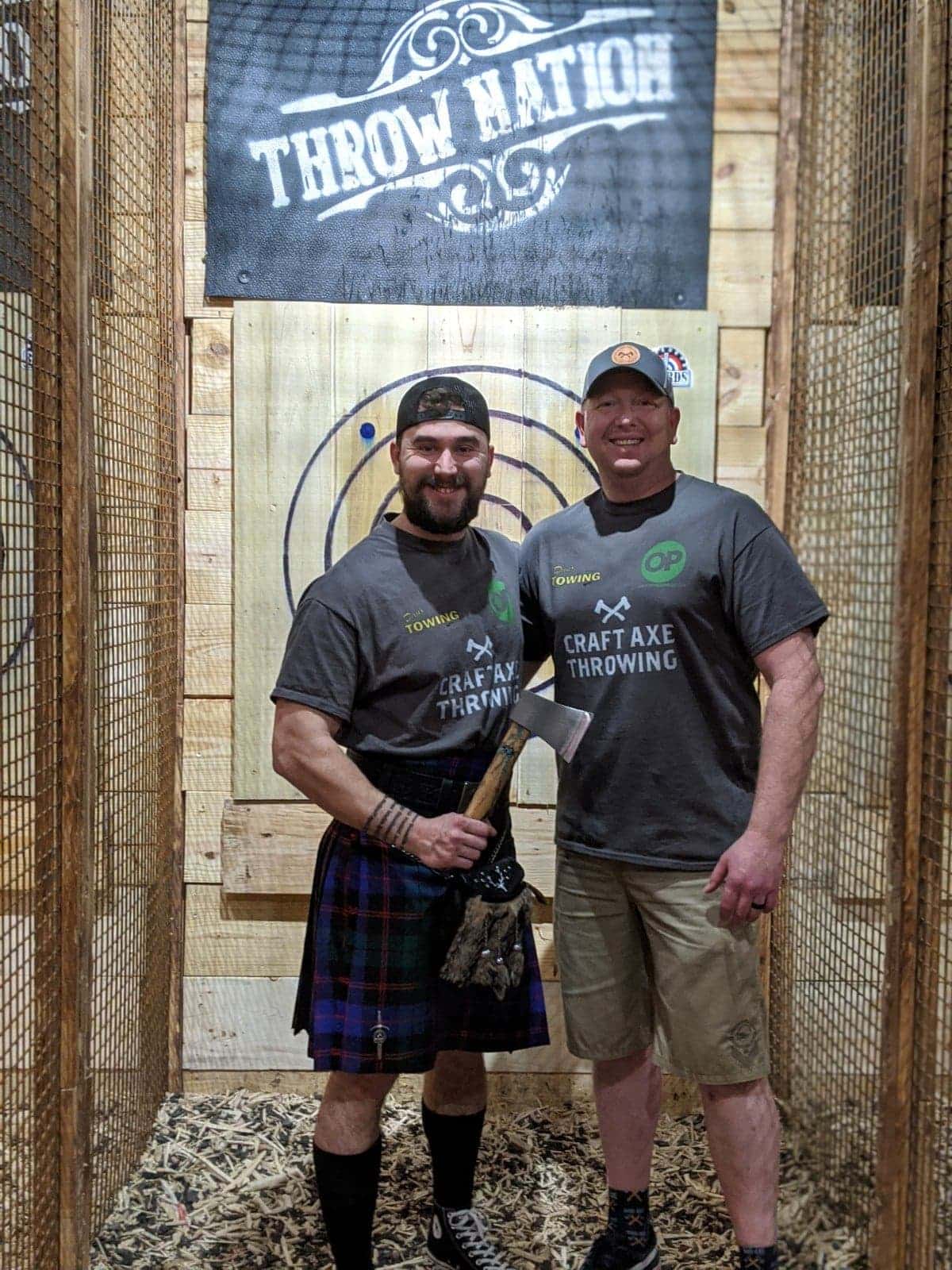 What was your first introduction to axe throwing?

Nick: a friend of mine suggested we go one weekend a little over a year ago so I said sure and ended up falling in love with it immediately. I didn’t even know about leagues yet but once I found out I jumped on it right away.

Ryan: I’ve enjoyed throwing knives since I was a kid, usually our kitchen knives, and around 2012 I picked up a tomahawk and got ok throwing it in the backyard. Then in early 2019 a group of friends and I finally checked out an ax-throwing venue and I was hooked. Set up a target in my garage within a month.

What’s the most exciting moment you have experienced in one of the tournaments?

Ryan: Hitting a kill shot against Zeus in my first actual big axe competition to tie game 3 and take it to overtime. I narrowly lost, but that was a very validating experience.

What is your favorite axe throwing competition to compete in?

Nick: I think The Arnold will always hold a special spot as that was the first major tourney but JJ’s axes and ales tournament in Sioux Falls SD was the first tournament ever. I took home the win in a nail biter of a 5 game series going into overtime and we still keep in touch with those guys every week.

Ryan: Duals. Nick and I have never been able to compete in Duals league before, but we still entered in the Duals division at the Ironside Open and placed 5th.

Who’s the better axe thrower between the two of you?

Nick: We go back and forth on this but I still think he is the better thrower.

Ryan: I’d have to give that credit to the guy who has his name on the trophies and the league board, which is Nick. I just try to make sure it isn’t easy. We have a habit of tying our matches and taking them to overtime which is always the best.

In your opinion, what makes Craft Axe Throwing stand out from other axe houses you have visited?

Nick: they really want to build axe throwing as more than a hobby. They really want to help make people come to enjoy this sport as so much more as it is really a family. The throwers I’ve met along the way immediately become like best friends and I have never experienced a more inclusive and friendly sport than this. Craft really helps cultivate a bond between the league throwers.

Ryan: The entire Craft team treats us like family and a valued part of the business. It’s refreshing to take people there, it’s like a cooler version of Cheers. Ain’t no party like an axe fam party because an axe fam party don’t stop!!

Do you like your chances of winning in the upcoming tournament?

Nick: The best in the world will be there. What I’ve learned this far into the game is it really only takes one game or one throw to make the difference. I’m going to do my best and hope that that day I get the lucky shot but we will see.

Ryan: I’ve been very happy with the improvements I’ve made, finishing higher with each tournament, and I’m pleased with the progress I’ve made in my game since the last tournament, but you can never underestimate anyone in these matches. But I’m definitely ready for our entire Craft Axe crew to show up over these next four weeks and let people know what Omaha has to offer!